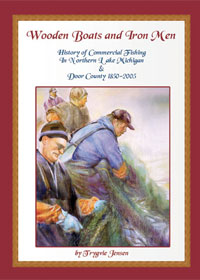 When fisheries were an integral part of the Washington Island community.

Wooden Boats & Iron Men will take you back to a place and time when the commercial fishery was the major industry at Washington Island and Door County. Read about one of the oldest professions known to man; in which the industry has survived for nearly two hundred years on the Great Lakes. Commercial fishermen are the living past, confronting an uncertain future. This book will take you back in time and show how the fisheries were an integral part of the Door peninsula and Washington Island communities, and will give the reader an inside look at how a fishery operates.

The book also gives the reader a personal view of a day in the life of a fisherman. It covers every facet of the industry, from the evolution of the boats, common types of gear used in the last 150 years, the species of fish that made up the great harvests, and the invader species that almost wiped out the industry in the mid to latter part of the 20th century. Get insight into the lives of the men and women, and the harrowing stories of these tough individuals caught in violent storms, ice shoves, and many other stories that will give the reader a better understanding as to what a commercial fisherman went through to eke out a living on the Great Lakes.

Read an excerpt from the book.