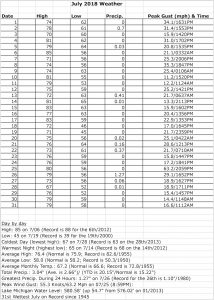 It is hard to imagine that on these mild, 65 to 75-degree days of Island summer, with lush vegetation and soil all around us, a chicken would be depressed.

Granted, we are past the peak of summer solstice by almost two months, and these beautiful days are noticeably shorter, but come-on, chicken depression?

Well, about a month ago, the Island experienced some days with dew points in the upper 60s to low 70s. That is downright muggy, even for a chicken. With over 2,160 feathers on its body, it’s not likely a chicken would head for Schoolhouse Beach.

Although, it could rest its head on the flat rocks, and dig a nice, cool, sand trench. Chickens on Schoolhouse Beach: think about it. Be sure to wear your shoes!

These are not record-breaking temperatures (either way, cold or warm), but anyone who has a garden knows it has not been a normal growing season. We continue to be “average” on growing-degree days, so maybe the old clucks sense this.

As of July 30, the Island’s total growing-degree days stand at 938, which is (again) slightly above the normal of 927. So, what exactly is going on if everything seems to be average? The inquiring clucks want to know.

This may seem hard to believe, but perhaps our average high temperature (76.4°F for July, and 69.8°F for June) was not high enough to produce outstanding growth. That’s one theory for the clucks to ponder.

While June gave the Island its fourth straight month of precipitation over 4.0” (4.46”, to be exact), July seems to have broken that trend. We ended July with only 3.04” of rain. That is only 0.38” above the average of 2.66”. Not bad, but nothing to cackle triumphantly about, right?

Well, say goodbye to a dry July. Everything changed in one memorable event on July 25. What seemed to be an innocuous thunderstorm at the start, quickly morphed into a destructive hay baler, with winds and pea-sized hail.

In the midst of a torrential downpour (with 1.27 inches recorded in a half hour), we recorded a peak gust of 63.2 mph (55.3 knots). The heavy, heavy rainfall brought the upper air winds down to the surface. The combination of violent rainfall, wind and hail suggested a wet microburst.

All of our weather equipment survived, which is a blessing, but it was a different story for Island gardens. Everything was flattened by the wind and punctured by the hail. So far, most of the crops have bounced back, but yields for the tomatoes and potatoes may be affected.

The nature of a wet microburst was not fully understood until the mid-1980s, when Dr. Ted Fujita’s pioneering work at the University of Chicago led to the publishing of a book called “The Downburst.” It presented ten years of research, observations and field data on the energy of violent storms.

Isn’t it ironic … when you think of the 1970s and JAWS, what do you think of? I wonder if Dr. Fujita ever went to the movie “Jaws?” I am willing to bet that some of his graduate students did!

August seems to be right on track for a bountiful precipitable month. As of this morning, Aug. 9, August has contributed 0.96” rainfall, well on track towards achieving the lofty goal of 3.54” average for the month. If our summer weather pattern remains unchanged, and we continue to reside on the southern boundary of the northern jet stream, we should meet the August precipitation goal.

Then again, if the ridging of high pressure over the intermountain West becomes progressive, and the axis leans towards the Great Lakes, then we could see a dry spell. This pattern would favor more spotty precipitation at times, and not enough to meet the August goal.

One final thought on the chickens. Lest we male roosters gloat over the fact that we don’t cluck, we should think again. Even a rooster, if frightened or agitated enough, will cluck. Or, to paraphrase the Tammy Wynette song (we have a Wyandotte hen named Tammy Wyandotte): “Who’s Clucking Now?” 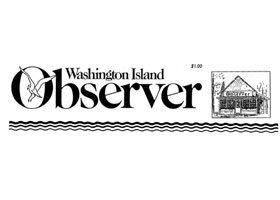