An Excerpt from “When The Shoe Fits,” by Mary T. Wagner 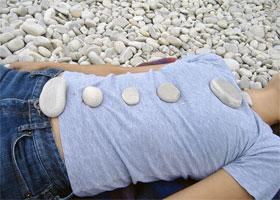 The feeling never gets old. As the ferry boat’s engines roar to life and the boat pulls away from the dock, the weight of reality slips from your shoulders like a silk scarf caught by the breeze and carried away, to vanish like a magician’s sleight of hand. Looking forward, from the vehicle deck closer to the water, the cold spray of dark waves cut by the ferry’s prow is bracing, awakening. Looking backward, the endless woods surrounding the dock and leaning over the shoreline gradually diminish to nothing as the ferry gamely shoulders it way across Death’s Door to Washington Island.

The journey was one of many I’d taken over the years, but the first one I was making alone.

The first had been nearly twenty years before. My friend Liz had a family vacation cabin on the island, and invited me to bring my two young daughters to visit for a few days one summer. Her husband was in medical school, and she often took her own girls up there for extended stays, to the island where she had spent her summers growing up.

The trip was an odyssey. Sensible minivan filled with two car seats, girls aged two and four, a chocolate chip cheesecake with a chocolate crumb crust, a four-pack of wine coolers, and other toys, accessories and accoutrements and beach toys for several days. We drove an unfamiliar route for hours, through the entirety of the enormous peninsula jutting like a thumb into Lake Michigan, all the way to land’s end and the ferry dock where we waited for the next stage of the adventure. Fares paid, we followed like sheep as the line of cars and trucks was guided one by one by the crew into four parallel lines on the boat, nearly bumper to bumper. Then, ignition turned off, we climbed the narrow metal stairs and settled in on a bench on the passenger deck. I clutched the girls in a death grip, afraid that they might lean too far over the side rail.

A half hour later, with windblown hair, sunburned cheeks and a sense of wonder, we disembarked and started following more directions to the cabin. We drove several miles as far north as we could, then turned east and drove clear to the far side of the island. Another turn north, and we eventually found ourselves driving to the outermost edge of the island, down a gravel path through pines and hardwoods. The cabin sat in a clearing, with white siding and a red roof gleaming prettily in the sun. Beyond the house was a bluff, and at the edge of the bluff, fifty foot birch trees swayed, their leaves glinting in the sun, as the Lake Michigan waves glittered in the distance like diamond dust. The air was clear and pure, and I felt like I’d arrived at the gates of heaven.

For years after that maiden voyage, we returned to the island as a family for a week every summer, with two children, then three, then four. The days were lazy, spent mostly at the beach, with occasional forays to the gift shops for souvenirs and ice cream. Eventually, though, the kids outgrew the sense of wonder at finding yet another clam shell in the water, and we found other places to vacation. Once the inevitable dissonance of college scheduling clashed with the local school year for the younger ones, it became hard to schedule family vacations at all.

But here I was, heading back to the island again, wondering whether I’d had a good idea.

The island wasn’t my first choice. The summer before, I had spent a week at a writer’s retreat on the peninsula. It was nurturing, encouraging, inspiring, invigorating, thought-provoking, and came with all meals included and prepared. I had planned to return for the replenishment of my writer’s soul, but could not get the week off work. So I dried my tears, and resolutely booked a tiny affordable cabin on the island, on the water, for a week when I could get away, when the boys would be out West in a camping adventure with their Dad. I brought a laptop, my notebooks, a week’s worth of Lean Cuisine meals and a carton of Instant Breakfast packets. Heading north on the interstate, condensation dripping on the mocha frappucino in the cup holder next to me, I had fleeting pangs of uncertainty about whether I could handle the solitude; the memories; the passage of time; the reminders of broken dreams. I needn’t have worried.

The cabin was tiny, and prosaic, with a yard and deck mostly surrounded by cedars but with a clear visual shot from the back door across the deck, through the yard and to the shore beyond. If I parked myself just right on a lounge chair, a diet soda next to me and my binoculars nearby, I could sit for hours and not leave the spot.

I wrote. I journaled. I read for the fun of it. I napped when I felt like it. I walked three miles every morning on quiet country roads that in places felt like cathedral naves. I bird-watched with a vengeance. I drove into town every day to pick up a copy of the Chicago Tribune, an ice cream bar and a candy bar, retreating back to my fortress of solitude to read the paper on the deck. I started the vacation by reading a few chapters of Henry David Thoreau’s “Walden” on the first evening, putting me in an excellent frame of mind for appreciating nature. I re-read “Gift from the Sea” by Anne Morrow Lindbergh from cover to cover. From the deck I watched a bald eagle soar around a nearby bird refuge, and a broad-winged hawk depart my yard with a snake clutched in his talons. I watched a pair of mute swans and their two little cygnets swim around the refuge nearly every day. In an interesting balancing of priorities, I weighed whether to check out the open trap-shoot or attend a poetry reading/discussion group about Emily Dickinson, unfortunately scheduled for the same evening. Civility won out, though I felt a bit like a Neanderthal crashing an Edwardian dinner party. Had a terrific time nonetheless.

Despite the low lake level, I finally found a shallow, crystalline, sand-bottomed bay in a nature preserve, and visited often, stretched out in the water while little quicksilver fish swam around me in curiosity. I watched an osprey return to land from hunting on the lake, his dinner suspended beneath him. I saw damselflies so brilliantly turquoise that I thought the first one was a piece of cast-off plastic, and dodged dragonflies the size of B-52s. One evening, a little tired of the flat, placid shoreline at my cabin, I went searching for crashing waves. I found them off Carlin’s Point. It took a half-mile hike in from the road to the nature preserve, then another quarter mile out across rocky, weedy flats where the lake shore used to be. Then further across slimy, rocky weedy flats, and then across slippery rocky shallows, until the water grew deeper and I finally had waves crashing on my knees. The wind nearly pushed me over, but it felt glorious. I stared in amazement at the aerial skill of a seagull hovering above my right shoulder, brilliant white against the blue sky, suspended in this gale seemingly effortlessly. I watched a great blue heron fishing out on a rocky islet, and felt an instant sisterly bond with a red-breasted merganser hen and her thirteen little ducklings who hung around my shoreline. Through all the years I’d been a soccer mom, I’d always said I’d felt like a mother duck.

The week passed quickly. I’d spent basically every minute of good weather outdoors, face down on the lounge chair on the deck or face down on a blanket in a dune at the shore. There was only the sound of the waves in the distance and the wind up close, sunlight dappling through birch trees and cedars, birds singing nearby, and the feeling of being hooked up to some giant life support system that was pumping something vital back into me.

The end of a trip to the island always comes, not when you return home, but when your car tires finally grab pavement on the mainland off the ferry. This time was no different. But as I meandered my way home, on no particular time-table, so relaxed I was still nearly boneless, I thought…

Yes, the island was a good idea.

Excerpted from “When the Shoe Fits…Essays of Love, Life and Second Chances” by Mary T. Wagner. Available on Amazon: http://www.amazon.com/dp/B00M39X7WE. 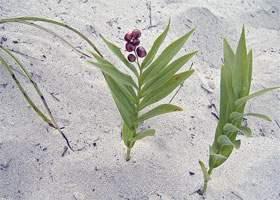 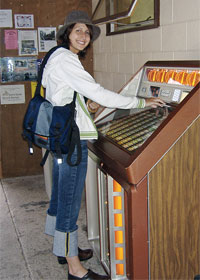 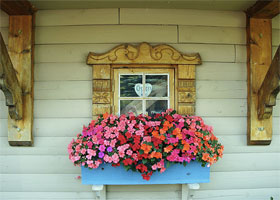 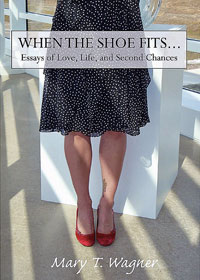