On a cool autumn night when you’re out with the dog, or maybe just on a walk to take in the crisp air, and you chance to look up and find the sky streaked with bright color, count yourself lucky. Catching the Northern Lights can be a spiritual experience, especially when you least expect it. When they make an appearance in Door County, the Northern Lights, or Aurora borealis, shine brightly; especially in the northern Door and on Washington Island.

The Aurora borealis holds special meaning on Washington Island. Local music legend Julian Hagen wrote a song called Northern Lights, released on his 1991 album “Break The Cycle.” While the mention of the Northern Lights is momentary, the song evokes the feeling of that special solitude found on the island, as well as the solidarity of the community. Perhaps for this reason, and possibly for entirely different reasons, Northern Lights has become the unofficial anthem of Washington Island. 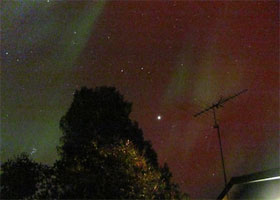 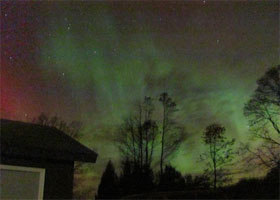 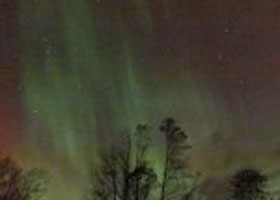 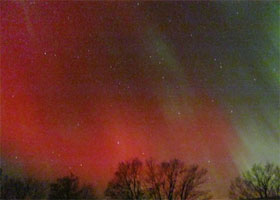 Though magical to view and at first inconceivable, the science behind this phenomenon is equally fascinating. The Aurora borealis is the result of gaseous particles in the Earth’s atmosphere colliding with charged particles from the atmosphere of our sun. Depending on the type of gas particles, the colors of the Northern Lights change. “The most common auroral color, a pale yellowish-green, is produced by oxygen molecules located about 60 miles above the earth. Rare, all-red auroras are produced by high-altitude oxygen, at heights of up to 200 miles. Nitrogen produces blue or purplish-red aurora.” Although these collisions occur around the magnetic poles of the planet, the light emitted can be seen from great distances, and the northern and southern lights are often almost mirrored images. (www.northernlightscentre.ca)

Small communities, stretches of farmland, and state parks make most of Door County ideal for sky-gazers, as it limits light pollution, and, while our northern exposure is not that of Alaska or the Yukon, our view is often uninterrupted over the bay on clear nights. According to the Northern Lights Centre of Canada, researchers have determined that the activity of these lights is cyclical, with a peak about every eleven years. The next expected peak is in 2013.

Winter in the Door offers longer stretches of darkness and many clear nights, so you might get lucky and catch a show, but if you’re determined, local midnight on clear nights is usually the best time to be on the watch. And if you long for that feeling of solitude and solidarity, spend a night on the Island this winter and look to the sky.