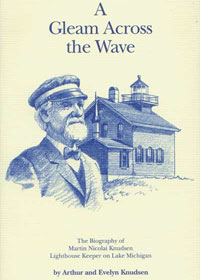 One of the things I have come to love about this place, living on the northeastern part of the Door Peninsula, is my close proximity to Lake Michigan and Death’s Door.

Water surrounds me in every direction. Mink River to the south; Europe Lake and Lake Michigan to the east; Porte des Morts to the north; Green Bay to the west.

There are days in the heat of summer when you can taste the cool air off Lake Michigan. Nights in the dead of winter when you can hear the ice cracking on the bay. Mornings in spring and autumn when the fog creeps in over the landscape, rolling, drifting, above, all around you, lending both comfort and pleasure in its evanescence and the mournful moan sounding from the fog horn on Plum Island.

The longer you live in a such a setting, the more you seek to know its local history. Who lived around here before me? What was it like the last century? The century before? How did they survive? What was recorded? What remains?

Some of these answers can be found in the recently re-issued biography of Martin Nicolai Knudsen (A Gleam Across the Wave), the lighthouse keeper of Pilot Island (the first island leading into the passage of Death’s Door), who was born in Denmark in 1854 and came to Washington Island with his parents (via Racine, Wisconsin) in 1886 at the age of 12. His son, Arthur, and daughter-in-law Evelyn, together wrote this engaging account of Arthur’s father’s boyhood and young manhood (in and around the islands of Door County and Michigan), and his life as a lighthouse keeper in the late 1800’s. The biography was written circa 1949 and is too good a book to be out of print for more than 50 years.

The story opens with a description of the islands:

Across the waters of northern Lake Michigan two similar groups of small islands stretch, like stepping-stones for Paul Bunyan, from the Michigan and Wisconsin mainlands to the Upper Peninsula. On the Michigan side they are South Manitou, North Manitou, South Fox, North Fox, Beaver, High, Hat, Gull, Hog, Trout, Whiskey, Garden and Squaw. Those on the Wisconsin side bear names equally as interesting but perhaps a trifle more dignified: Plum, Pilot, Detroit, Washington, Rock, St. Martin, Poverty, Summer and Little Summer.

Some of the islands are too small to be of use to man and are therefore left undisturbed to Mother Nature and the gulls. In the days when travel by water was the quickest, easiest and cheapest means of getting from one place to another, enterprising communities thrived on a few of the larger islands, where now the only inhabitants are the light keepers and coast guards.

Rock Island boasted the first settlement in Door County, and unmistakably Yankee names predominated. Later on most of the Rock Island people moved over to nearby Washington Island because of its greater advantages.

At one time St. Martin’s Island had enough people living on it to support a church and a school. A group of spiritualists held meetings there in 1860s or 1870s. The old-timers love to tell about a school teacher who once taught on St. Martin. He was an Englishman who had difficulty with his h’s. Some innocent-eyed youngster would raise his hand and ask: Please, Mr. Severs, how do you spell saloon? And Mr. Severs, rising to the bait, would reply: “Saloon hess, hay, hell, two hoes and a hen.” Little faces would then dive behind their lesson books and little shoulders would shake. The book is filled with this kind of warmth and detail in capturing the past and the people of this place many of us think we know, but hardly realize its history.

But the local history/humor of the preceding incident only begs more questions. People actually living on St Martin’s Island? Spiritualists convening there in the late 1860s? An Englishman teacher? How did he ever find the place?

Speculation and information of this sort abounds in these pages.

The Civil War may seem far removed from Door County and the islands, yet there are continued references to it, including the fact that the lighthouse keeper’s father, Peder Knudsen, enlisted and took up arms for his adopted country.

There are vivid insights into Martin’s boyhood on Rock Island, a boyhood filled with the adventurous experiences of sailing, fishing, and the fine art of coopering.

Life on Rock Island was greatly to his liking. How he gloried in the challenges that Lake Michigan threw at those who ventured into her waters! The fishermen were more than willing to have him go out with them when they went out to set or lift their nets. Many of the staples for the fishermen and Rock Islanders were brought in by a sturdy little schooner called The Trader owned and sailed by Captain Charles Morbeck of Ephraim. Captain Morbeck allowed Martin to try his hand at sailing the schooner and was surprised and pleased over the quick, sure way that he took hold. But sailing was only one of many things that Martin was adding to his store of ability and knowledge. He was now learning the cooper trade by watching his father and the other coopers at work.

Every page seems to yield yet another unknown or realized nugget of local history. From Mackinaw boats to store boats. The fact that dock owners were the bankers to the community. And how many, I wonder, know that Washington Island had a number of families in the vicinity, near the dock, that was referred to as the Irish Village? There were Tom and Tim Coffey, the Guinans, Hugh McFadden, the O’Neills, and the widow Weaver, who kept the boarding house, and who had come from Ireland. The Irish were light-hearted, happy people who loved a good time. Now and then a jig competition would be held on the dock, to the delight of the coopers, fishermen and sailors; and numerous parties and shindies and an occasional bout of fisticuffs added to the general merriment.

There’s also an excellent chapter on Bethel Church and the role religion played in such an isolated community. This same chapter reveals yet another little known historical fact: the black community on Washington Island.

In 1854, in a colony of colored people at West Harbor, there lived a preacher named Bennett, whose meetings were often attended by the white folks of the Island as well as the colored. Whence these colored people came and where they went remains one of the Washington Island mysteries.

And there’s a chapter which covers both Martin’s marriage to Theresa Koyen in 1875 (one of the old family names that is alive and well on Washington Island to this day) and his first appointment to Pilot Island. Thus it came about that one of Martin Knudsen’s boyhood ambitions was realized: he had become assistant keeper of the light at Pilot Island.

The last third of the book paints a beautiful but realistic picture of life as a lighthouse keeper. Many passages are truly unforgettable. The danger in saving lives. The isolation, the hard, hands-on work. The dedication and courage of these men, Martin in particular, is almost impossible to imagine in these days of picking up a cell phone in case of emergencies and simply calling 911.

The book ends with a description of a silver medal in honor of services rendered, presented to Martin Knudsen a medal from the United States, in token of his bravery in rescuing those aboard the Nichols, shipwrecked during Martin’s tenure. One side shows a man being rescued from the angry waves by an angel of mercy. On the other side, the words around the rim are these: In Testimony of Heroic Deeds in Saving Life from the Perils of the Sea. And inside a wreath of leaves there is engraved the following: