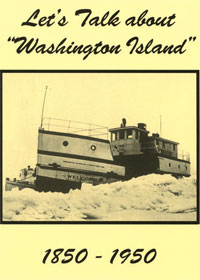 “In 1837, there was built on Rock Island the first lighthouse in Wisconsin.”

“Birth of a New Township”

In 1837, there was built on the north point of Rock Island the first Government Light in Wisconsin, attended by David Corbin and his good friend, Jack Arnold, both veterans of the War of 1812. David Corbin kept the light until 1852, but Jack Arnold died in 1848. Rock Island with Detroit and Washington Island were known to the early explorers as the Pottawatomi Islands. If Nicolet followed the regular waterway from the north through this district, he must have been the first white man to have seen these islands, 200 years before the light was built.

It was between 1835–1836 that pioneers first recognized the possibilities of fishing successfully in the waters around Rock, Washington, and Detroit Islands, and a few cabins began to appear for shelters. Several trappers and fishermen settled on Rock Island, which grew into a substantial colony, with homes largely along the east shore where there was a sandy beach.

It was a beautiful situation with flowers and wild berries in quantities. The timber was excellent, but those who settled there were essentially fishermen and were content to fish. Familiar early names were John Boone, George Lovejoy, and Chief Silver Band with his tribe and as many as 50 teepees at one time. Both Boone and Lovejoy spoke Chippewa fluently, which kept the situation harmonious among them. History holds a warm place in its heart for this island and its people, with their love of Peace.

In retrospect, there is a glamour shed over Rock Island. It was the cradle in which Washington Island was rocked, and many of the fine qualities of those people became the heritage of Washington Island, as though the rhythms of the cradle flowed into the life of its sister island. Patriotism, love, and excitement were the standards accepted, and they colored the lives of the men and women, many of whom were descendants of the Pilgrim Fathers who had dared venture into unknown lands as had these men. Religiously, they were an undenominational group; professionally, they were fishermen.

When the light on north point was erected in 1835, there were only about 12,000 white people in the entire territory. Nevertheless, there seemed to be enough travel and shipping to warrant the move. Four years later, there were 31,000 in Wisconsin. Vessels plying past the light increased as the demand for shipping grew from Chicago ports, until within 10 years records show 1,400 ships left Chicago in one season. For many years, the shipping demand far exceeded the capacity of the vessels.

Arrival of the Yankees

In 1844, a group of “Yankees” from the east had taken to the covered wagons with their creaking wheels, springless seats, and their household goods, reached Chicago and settled on the Calumet River in a town called Lemont. This was a malaria-infested spot, so by the time they had heard of Rock Island and reached there, most of them were shaking pitifully with ague. “Janes Ague Cure” bottles were much in evidence, but those who are supposed to know and still are faithful to the wonderful “air conditioning” of these islands say that it was but a short while before the “shakes” had entirely disappeared. Nevertheless, one who knew Henry Miner say Janes Ague Cure was sold on Washington Island long after Mr. Miner had left Rock, eventually becoming a regular “cure-all” remedy. In fact, that colony from Lemont should be known as the original advertising agency in the Northern Peninsula.

Among those who came from Lemont was Henry Miner and his older brother, T. T. Miner, who built a dock and ran a store that was well thought of by all on the Island, especially the ladies, and many a piece of lovely material was brought by Job Luther on the vessel he said between Chicago and Rock Island. For years, he freighted fish down the lake and returned with mail, supplies, and fisherman. The community grew. There was an interesting social life on Rock Island with many out-of-door festivities, an occasional schoolteacher, and a Doctor Ellis, who did not remain long as there was so little business.

Life on Rock Island was always full of interest as well as difficulties, tragedies, and sorrows. The greatest material difficulties were the harbors. They were good, but those on Washington were better, and the larger ships were beginning to stop there in preference, so some of the fisherman began marketing from Washington Island. This exchange supplied a wedge for closer social activities, and it became a pleasure to spend some time on Washington Island over a cup of hot tea or coffee, gossiping about all the questions that interested the ladies in a pioneer world.

Among these topics was that of the strong drink that was being sold to the Indians. As the women were alone so much of the time while the men were away fishing, they decided some sort of protection was due them. Women, you must realize, have a way of pushing any idea they feel has possibilities so they pushed this one. The men, undoubtedly, weary of hearing their arguments, finally decided that the best way to security would be to incorporate the community of 318 souls which included Washington, Rock, Detroit, and Plum Islands.

A Date to Remember

On June 20, 1850, the township of Washington was born at the home of Henry H. Miner, almost co-incident with the birth of his son Jesse, the first white child born in these parts. Mrs. Miner had her troubles that evening, too, but she handled it with the spunk of the pioneer woman. When the arguments of the men became too heated, she announced that if they could not be more quiet and stop waking the baby, they could take their meeting to another place. The meeting became more quiet.

From among those present, the following were elected: Amos Saunders, Chairman; John Boone, Justice of the Peace; Henry Miner, Town Clerk. Those Miners always had a way of keeping records, which extended to his son Jesse in later years in the form of a biography of the Township.

Shortly after the close of the Civil War, the active life of Rock Island was over. It was difficult to leave a home surrounded with familiar remembrances and great affection; but the march of progress was at hand with a finger pointed toward “better times.” After all, it was but a change of address from Rock Island to Washington Island. With the chartering of the Town of Washington, it was quite in keeping with the disposition of the Island, for it was not until two year later that Door County was organized. Washington Island always had a knack for doing things differently.