The February 2014 issue of Lakeland Boating Magazine has paid homage to beautiful Washington Island, calling it a “cruising boaters paradise, rich with history, natural wonders and family friendly activities.” The article draws in readers by painting an attractive picture of island life – Jimmy Buffet on the stereo, frosty beverages and hors d’oeuvres on the boat, the late afternoon sun over cobalt-blue waters – and gives you a glimpse of Door County’s little slice of paradise.

Writer Heather Steinberger explains everything from who discovered Washington Island (Jean Nicolet), to the history of the famous “Death’s Door” (named due to the unpredictable currents, changing weather conditions, and difficult navigation through the passage between the island and the mainland), to the early settlers (Henry Miner) who founded the Town of Washington, incorporated Washington, Rock and Detroit Islands, and built the island around fishing, lumber, stone quarries, and farming potatoes and maple syrup.

Noting that the island’s nearly 700 permanent residents who continue to keep Washington Island’s rich history alive, Steinberger explains that they mainly rely on “tourism, the arts, carpentry, Christmas trees and organic farming to make a living.” She also gives a shout-out to the Washington Island wheat that is brewed in Capital Brewery’s famed Island Wheat Ale, as well as Death’s Door Vodka and Gin, available all over the United States.

For readers interested in traveling to Washington Island by boat, Steinberger mentions in great detail the locations and amenities of the four marina options available: Shipyard Island Marina, Kruger’s Kap’s Marina, and Island Outpost in Detroit Harbor, and Town Dock in Jackson Harbor. For those traveling by vehicle, the Washington Island car ferry is a fantastic, reliable alternative; it’s a quick half-hour ride and is offered year-round.

For those arriving by boat or by ferry without a car, Steinberger mentions all the great ways to tour Washington Island. She suggests hopping on the Cherry Train or Viking Tour Train for a guided tour of the island, or renting bicycles, mopeds or kayaks from one of several rental shops. If you plan on heading to Rock Island, which you can also only get to by boat, the Karfi Ferry (from Jackson Harbor) and Island Clipper passenger ferry (from Gills Rock) both operate from May to October.

Steinberger reminisces about some of her favorite Island sites while touring this beautiful island. At the Washington Hotel, Restaurant & Culinary School, she tried the “The Washington” – “a sparkling mix of white wine and tart cherry juice,” as well as “savored a six-course gourmet dinner.” At Nelsen’s Hall she joined the famous Bitters Club (patrons take a shot of Angostura bitters and receive a free Club card). Not the tastiest beverage, she says, but to her “it was worth it to sit in such a venerable establishment, sample the famous wares and receive a Bitters Club membership card.”

Washington Island activities and highlights mentioned in the article include swimming, sunbathing and snorkeling at one the gorgeous public beaches, picnicking at Percy Johnson Park or Sand Dunes Park, horseback riding at Field Wood Farm, playing a round of golf at Deer Run Golf Course, climbing the lookout tower at Mountain Park, touring the Historic Island Dairy building, touring the Farm Museum, and hiking the Heritage Nature Trail. Cultural attractions include the visiting the historic Jacobsen Museum, checking out the impressive Jackson Harbor Maritime Museum, and visiting the Washington Island Art & Nature Center.

With an abundance of restaurants on the island, including the Albatross Drive-In, Bread & Water Cafe, The Danish Mill, Deer Run Pub & Grill, Fiddler’s Green, Findlay’s Holiday Inn, Island Pizza, KK Fiske & The Granary, Karly’s Bar & Cellar Restaurant, Red Cup Coffee House, Sunset Resort, and Time Out, as well as food and supplies at Mann’s Mercantile Store, you will never be without a great meal on your trip to Washington Island, an important note for boaters who “often get tired of their own provisions and cooking.”

“Whether you’re on the island for a night or a week, you’ll quickly feel that there’s a special magic here,” said Steinberger. “This laid-back, friendly Scandinavian community warmly embraces visitors, and they’ll make you feel part of the distinct 150-year-old tradition. There may be islands all over the world, but there is only one Washington Island.” 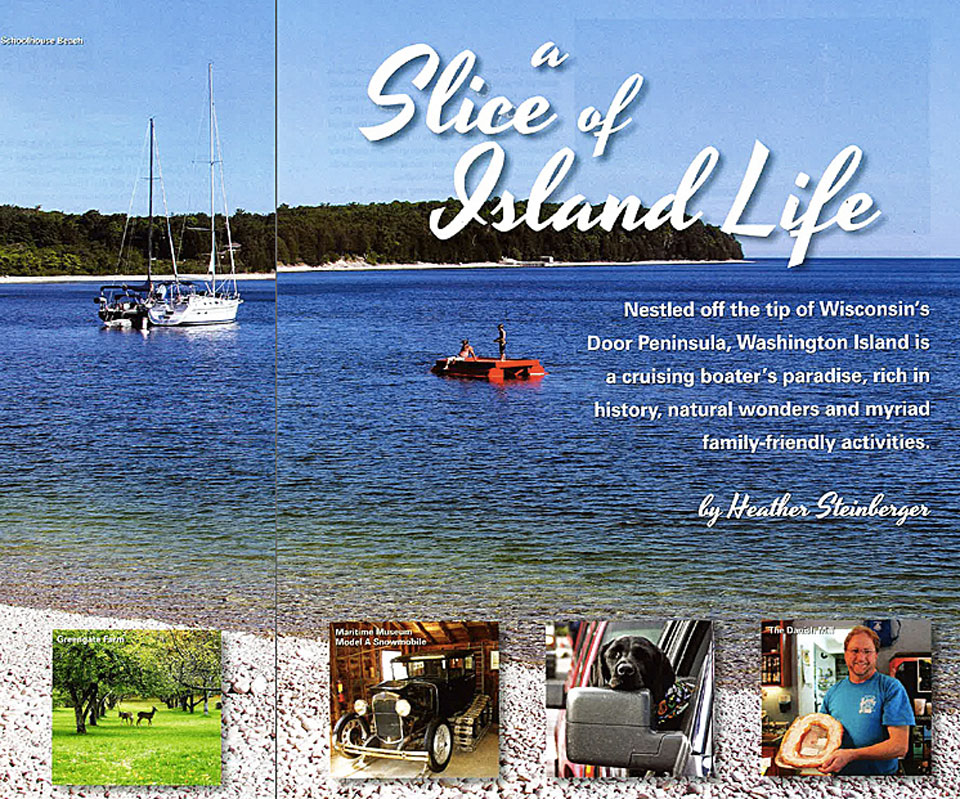