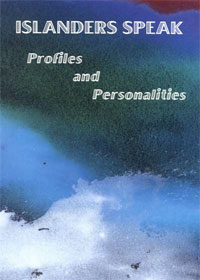 “For 25 years, Tom Wilson has traveled by ferry to fix Islanders’ teeth.”

On a wintry Tuesday morning in Sister Bay, Dr. Tom Wilson sips the last of his coffee, kisses his wife Gunilla and daughter Karin, and pats their dog Mandy on the head. Then he heads out the door with a bulging blue Land’s End briefcase for the Northport dock and, ultimately, his dental office on Washington Island. For 25 years, he has traveled by ferry to fix Islanders’ teeth.

With only one daily ferry scheduled in winter, Dr. Wilson—just “Tom” to his Island patients—won’t be back home until sometime late the following morning, when the ferry returns to the mainland. Janet Hanlin, Island Clinic receptionist, makes appointments in his absence, but it’s basically Tom working alone who greets eight to 10 appointments each Island visit, plus some walk-in emergencies, a full day for a one-man show.

For the 680 permanent residents of Washington Island plus the many summer visitors who find his services convenient, Dr. Wilson’s Island visits save both time and money.

Because a good share of the morning is spent en route to his Island office, Tom skips lunch and works late, often beyond 6:30 p.m. After the last of his patients leave, he sets out for the home of nearby friends to spend the evening, arms clasping denture models, lab work, and his briefcase (“I always sleep well on the couch”). Occasionally, he curls up in the dental chair, surrounded by tools of his trade, rather than bother anyone else.

Tom’s dental rates reflect a low overhead. The Island dental office is provided by the town, with the purchase of major equipment, furnishings, x-ray, phone, and consumable items courtesy of the Island Memorial Medical Fund. Although the fund was organized in 1959, there were very few dollars to work with until 1972. That year, Freddie and Olga Koyen, brother and sister and lifelong Island farmers who scrimped and save, entrusted the organization with their savings in appreciation for Island physician Dr. Rutledge’s care.

With further donations of support by individuals and Island civic organizations, the Fund grew. Since 1978, interest from the principal has provided the island community with more than $182,027 in medical assistance. Besides dental care, the Fund also supports efforts of the Island clinic staffed by resident Dr. Marjorie Bass, and an optometry office staffed one day per week, May through October, by Dr. Richard Wiesner of Sturgeon Bay.

Tom’s approach to his dental practice is straightforward and modest. He holds a dental degree from Marquette University, but Tom says, “I don’t’ think of the doctor title; I think of what I do.” It’s not only the way he runs his practice, it’s also the way he lives. Casual and unpretentious, Tom is often met by his first patient as the ferry lands, who drives him to the Community Center to begin work. And if no ride appears, Tom thumbs a ride with anyone headed that way. Sometimes, it’s the Mann’s Store truck.

In an interview, he recalled a poem entitled The Station, which he paraphrased: “The journey is what’s important. It’s the little things, putting them together to make a whole picture.” What kinds of little things? What picture?

Tom responded, “The interesting things . . . the associations with Island people over the years . . . creating a lifestyle that’s interesting, slightly atypical.”

“I came over on my first Island visit in 1974 at the invitation of Dr. Paul Rutledge, the Island doctor, and Community Action Program (CAP) Director Thor Williamson,” Tom recalled. “They showed me an empty room in the Community Center building asked me what I, a recent graduate, thought it would take to start up an Island office. ‘About $600 should do it,’ I guessed. I really had no idea.”

Over the years, Tom’s daily patient count has remained fairly constant with the number of emergencies actually decreasing. “Vitamins with fluoride, a program provided by the Medical Fund, had a great impact on children’s dental health,” he observed. Tom monitors Island dental health improvements by comparing the three generations of family members he sees.

But it’s the ferry ride that sets his practice apart from any other. Only a 30-minute ride each way in summer, a long ride of several hours of the ice-breaking ferry C.G. Richter can upset the day’s appointment schedule. His return home the next day might also be delayed, on rare occasions leading to another overnight stay when the ferry couldn’t get through ice fields in the Door.

“I have to weigh, should I come over? Can the program wait until my next visit? If it wasn’t the matter of the ferry trips and overnights, I could be there in five minutes. That’s the toughest aspect. Instead, when I arrive there could be a full day of patients, some unannounced, with the phone ringing often. It’s like you’re in quicksand if there’s a week or two between visits.”

His unique routine may not be a professional path followed eagerly by others. But fortunately for today’s Island people, Tom has a supporting family, and he continues to enjoy the ferry rides and Island friendships.