“Northern Lights” is a Julian Hagen song that has been unofficially adopted as Washington Island’s theme song. In the accompanying video he performs the song with Peter Nehlsen on bass and vocals, Laura Hagen on vocals, and Julian on lead vocals and guitar. The performance date was December 5, 2009 at Fiddler’s Green on Washington Island.

Read the lyrics to “Northern Lights”. 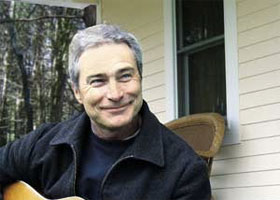 Washington Island songwriter and entertainer Julian Hagen performs classic Door County folk music that is heartwarming and delightful, infused with an unmistakable sense of humor. A featured performer throughout Door County and beyond, Julian has built a loyal following among countless fans, each attracted by his magnetic personality, strong vocal skills, songwriting ability and stage presence.

Hagen performs regularly with his musical immediate family, a dozen singers who range in age from 14 to 82; fellow Island residents such as Peter Nehlsen and Laura Hagen, and with friends like Lynn Gudmundsen, Chris Irwin, Rich Higdon and Hans Christian.