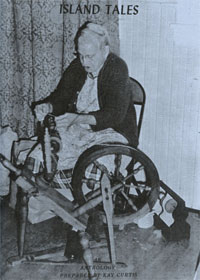 History and Anecdotes of Washington Island by the first white child to be Island-born.

An Anthology Prepared by Kay Curtis

“History and Anecdotes of Washington Island”
by Jessie Miner

(First White Child to be Born on Washington Island)

The first settlement in what is now Door County was made on Detroit Island, about 14 or 20 rods south of the northwest point near where F. S. Richter’s Dock now is, in May or June 1834, by two young fisherman who wintered there and fished the next summer ’til about August first 1835, when according to the story told by the one survivor, the Indians attacked them in the night. The logs of their shanty was too thick for the round bullets, from the smooth-bore rifles, and the arrows of the Indians to penetrate, but his pardner carelessly got in front of their little windows, and the plank shield they had was not so thick but what one of the bullets (maybe from a crease bore rifle) penetrated it and killed him. Soon after daylight, the Indians withdrew to Washington Island to bury their dead. Soon after this, he looked out on the door and saw a welcome sail. It was a government vessel going up to Government Bluff near Sturgeon Bay to get a load of stone to improve Chicago river or harbor near Fort Dearborn. He hailed them, and some sailors came ashore with the yawl and took him and his nets aboard the vessel, and then went up to Sturgeon Bay to get their load of stone. As luck would have it, two of my uncles were at Chicago at the time when the vessel came, and the oldest, F. H. Miner, said that some of the crew said the logs of the shanty on Detroit Harbor were well marked with the bullets and arrows of the Indians.

I can remember of finding a bow six feet long on the beach near Andrew Swensen’s place in 1856. As the Indian rule for making their bows was to make it just the height of the one that was to use it, so you see the bow was made for an adult Indian, showing that full-grown Indians did use bows and arrows as late as 1856, over 20 years later than the incidents occurred on Detroit Island.

Jacob Richter was married at Lobdell’s Point in 1856, clothed in oil skins, just as he came off the lake from Channel Bank. Joe Lobdell was justice of the Peace. The steamboat came in and brought word that Joe had to go to Green Bay on important business, so he gave the women folks warning and they were quite well prepared, but Jake was on the lake, and Joe met him on the dock just as soon as he lands. So he told Jake, who was to be married the next day, that he would perform the ceremony while the boat was wooding up, or “you’ll have to wait ‘till I come back and that may be a week,” and most any of us who have been through the mill know we would have done the same thing under the circumstances. I know the last three days before my wedding, oh, how they did drag!

The first wedding celebrated on Washington Island was in the winter of 1848, between the head of the bay, at Jacob Young’s. H. D. Miner came over from Rock Island and Jonathan Rowe said to him: “My daughter Lib and young Gardner want to get married, and there is no preacher or Justice of the Peace nearer than Green Bay. You preach sometimes, can’t you marry them?”

Miner said, “I have only an exhorter’s license, I am not ordained, but I will take the risk so bring on the young couple.” So Miner married them and gave them a certificate. It went all right for a time ’til someone get mad at Miner. They told him that they would make trouble. The last I remember hearing of it was in 1858. A lawyer wrote to him that he would defend him for nothing if they made him more trouble, as there was no one nearer than Green Bay, and no one could expect a young couple to go there in the winter with no roads and 90 miles of ice to travel.

The Town of Washington was organized June 20, 1850, on Rock Island, on lot 2, section 23, at the home of Henry D. Miner. I bossed the meeting. I was two weeks old. The men disagreed about something and they made quite a racket, and I began to bawl and my mother told them they must make less noise or go outside in a hurry, so they concluded to keep more quiet. Amos Sanders was appointed Town Chairman; H. D. Miner, Town Clerk; John A. Boon, Justice of the Peace. I cannot find the names of the constables, assessor, etc.

It has been told that the town was organized to prevent the Indians from getting whiskey. When the white men were on the lake and the Indians, about 75 of them, got filled up on Forty Rod or Squirrel whiskey, the white ladies got nervous. All you ladies know how it is yourself.

John Oliver and his brother, Andrew, were selling stuff to the Indians, but Andrew would not let an Indian have a drop of “Skuta Waba” firewater, or whiskey.

Father always said that the line, as they understood it, was halfway between Rock Island and St. Martins, running thence west to the center of Green Bay, keeping the center of Green Bay to a point due west of Menominee River, thence to Boyers Bluff than that, then went East, and when he came back, he changed his decision to near where the old line was as given to the organizers of the Town in 1850.

In 1851-52-53, there was a large addition to the Illinois colony, and among the rest, four Gunaway boys, Volney Garret, Mortimer Wellman, George Roberts, and Sam Runion. Those boys were all about 17 years old. Volney Garrett never went back to stay, raised a family here, and died in Egg Harbor a year or two ago. Young Runion and young Robert went to St. Martins, and in the winter of 1853-54, Charles Flyn sent them to Craw’s Store at Washington Harbor to get a keg of Wig-Wag Whiskey, manufactured by J. M. Craw & Son at Cleveland, Ohio. They went by our house at Dutch Town. It seems as though I could remember seeing them in the snowstorm, but I suppose it is imagination from hearing my folks speak of it so many times. They never came to St. Martins, but Joel Westbrook went to Rock Island to try and get some hay to replace some that Craw’s men had taken from him. His yellow dog Bose went out towards St. Martins and soon he barked, so Westbrook went out to see what was the matter. He found the bodies of the two boys and the sled with the key of whiskey tied to it. He came to Washington Island expecting to report the facts to the authorities, but Craw’s barn burned that night and Westbrook was arrested for the crime and taken to Green Bay jail, so the boys were never hunted up, and the boys and their keg were never found. Westbrook and his son lay in Green Bay jail over eight months. He was defended by Joe Loy and G. O. Howe. The jury disagreed, and Westbrook came back and lived ’til 1870, when he went to Illinois to finish his days, where he died about 1890, I think. I was there in ’93, and I think he had died two or three years before that time, so he must have been about 90 years old. Westbrook came to West Harbor in 1852 after Sam Graham went to the East Side of Washington Island.

Then there was a colony of negroes came to West Harbor in the early ’50s when Sam Grayham owned West Harbor. Joel Westbrook made them feel uneasy. Woodruff said he was the first white man on the Peshtigo River.

Mortimer Wellman, the other runaway boy from Illinois, was sent out to the wood-pile to get some oven-wood, after he got homesick, so he went home and carried his mother the armful of oven-wood. He was a mischievous boy. One time in 1854 when Rev. Hamblin was baptizing some young converts near what is Furlong’s or Booth’s dock, he threw himself backwards into the water with a tremendous splash, then when someone tried to save him, he swam away just as easy, then laughed at their fears. After the baptism, they adjourned to a little schoolhouse between Little Lake and Washington Harbor to have a preaching. He and another young fellow were making fun. Scotch McDonald grabbed them by the neck and slammed their heads together and said, “Behave yerselves in meeting or I’ll shake the Devil right out o’ye.”