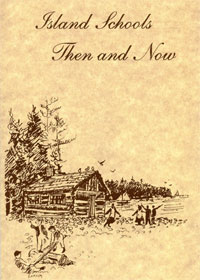 “School was a magic place. In fact, I ran away to school before I was supposed to.”

Compiled and Edited by Sylvia Nelson and Goodwin Berquist

“School Was a Magic Place!”

School was a magic place for me—I dearly loved it. In fact, I ran away and went to school before I was supposed to. It was then a one-room school taught by Anna Sigurdson with an enrollment of almost 80 kids (all eight grades). At first, John Jessen and Lucien Boshka (big boys) hid me behind their big geography books. Anna must have put me in class since her records state, “Since Sylvia read 86 pages, I think she can go into the second grade.”

When I was a child, our new two-classroom school was built. Begun in 1917, it was completed in October 1919. How exciting to go to school in this huge new building! Since Anna was not certified to teach in a “state graded school,” two graduates from the County Normal School were hired to replace her. The primary teacher was Swanee Holand, daughter of H. R. Holand, the county historian. The teacher for Grades 5 to 8 was Laura Densow. Swanee married Islander Tom Johnson. It was common in those days for our schoolteachers to marry local people.

I liked my teachers, but I’m especially grateful to Earl Kjer for teaching me to love poetry—I memorized many, many poems. My neighbor, Harvey Cornell, was a great eighth-grade teacher for me. He was later my County Superintendent, a fine supporter, and a good friend.

I attended the private high school for three years, earning enough credits to graduate. The first high school commencement was held at Tom’s Hall (Nelson’s) with 11 graduates. Olga Wickmann, a wonderful lady, was our teacher that year.

I had always wanted to be a teacher. My older sister was teaching, and it was decided I would attend the Door-Kewaunee Normal School at Algoma. I could be certified after one year there. Varian Hanson also chose to go there, which was just great. We lived in the dormitory with 10 to 12 other girls under very rigid rules: In your room studying weeknights at 7:00 p.m., lights out at 10:00 p.m. Two lady teachers were the matrons. Our housekeeper/cook was Tillie, a simple, kind soul who was quite deaf. Men were never allowed beyond the front entrance.

Door-Kewaunee was an excellent training school. We learned to teach by teaching. We had a department with children in all eight grades, and from the first month, we were teaching classes. I had a set of the finest math and language methods I’ve ever seen, which I used all my teaching years. They can even be adapted to the new math.

We seldom got home, but Varian and I had each other.

At Christmas time, I took a pokey train from Algoma to Sturgeon Bay where I met my sister Olivia. We rode the stage, which carried the mail to Ellison Bay and stayed at “Iceberg Inn,” as it was called. In the a.m., we got on a bobsled pulled by horses and carrying mail, freight, and other Islanders and headed east across the peninsula for Europe Bay. It was a long, cold ride. The mail boat from the Island landed, and we all got on, then traveled south of Plum Island and Detroit Island and landed on Washington Island near the sand dunes. We walked ashore near Sarah Magnusson’s. Bill Jepson was the mail carrier. This was typical winter travel 60 years ago.

I graduated in 1930 with a First Grade Certificate, which was good for five years. The Door County Superintendent told Varian and me to apply for the Lucke and Jackson Harbor Schools, two rural one-room schools on Washington Island. I’m not sure we were so pleased to be sent back here as it might have been more exciting to go elsewhere. We were both hired at $100 a month (for nine months), which then was top wages.

I taught at Jackson harbor for nine years. The children who were my first graders in 1930-31 graduated from eighth grade by the time I “retired” in 1939. (Miss Andersen had become Mrs. Nelson by this time, and the custom in the Depression dictated that she must be let go lest she occupy a position for which a male-head-of-family might be qualified.) I became very much attached to Jackson Harbor pupils and many of them are still my dear friends.

The Jackson Harbor School consisted of a single room with an entrance hall divided into two parts. Boys entered through the west door and girls through the east. This entrance hall served both as a cloakroom and a storage area for lunch boxes. A small shelf held an enamel washbasin, a pail for clean water, soap dispenser, and a pail for wastewater. Since the area was never heated, the water froze in winter. The well was behind the school, and boys carried in the water. For drinking, there was a crock-like container commonly called “the bubbler.” It was made of heavy pottery and very difficult to clean (teacher’s job).

A large pot-bellied stove with a big metal jacket around it stood in the southwest corner of the room. Attached to it was a metal container which held a couple gallons of water and humidified the air. The teacher was the janitor. Boys helped by carrying in wood and kindling from the woodshed (now a lovely cottage which house teachers for the Sievers School of Fiber Arts).

Since the building had no insulation, no storm windows, and 15-foot ceilings, in winter it began to get fairly warm only by late afternoon. There was a platform at the front of the room which had a single floor. The teacher wore her boots all day. With the help of a WPA crew, the ceiling was dropped a few feet, a double floor put on the platform, and storm windows installed. This made the building easier to heat.

Mice were plentiful and were often seen running in and out among the lunch boxes or up and down. When the teacher found one in a desk drawer where its diet had been student papers, the children would always hope it had eaten their report cards.

I lived five miles from the Jackson Harbor School—no problem when the weather was good and roads were in good condition. But in the spring, many roads had deep mud and some were flooded. Main Road had an area known as “the bridge” from Charley Hanson’s (now Ted Hanson’s) to Zink’s Hill that was many feet deep. Airport, Range Line, and Mountain Roads as you turn north of Town Line would often have mud over the running boards of a Model A Ford. It was best to get an early start and hope you chose the best route. On Jackson Harbor Road, east of Mountain Road, was another flooded area. Fortunately, trucker George Hanson, a wonderful neighbor, met the teacher and pupils at Mountain Road and transported them through the pond morning and evening.

In winter, I boarded with neighbors near the school. If there was a bad snowstorm, Bill Jacobsen and George Hanson hitched their team to a bobsled and took pupils east got the Jackson Harbor area. Huge drifts near Mountain Road and west of school as far as Range Line made it necessary to detour through what is now Jim Gage’s yard. Going east, it was necessary to detour south of Ione Davison’s and the Siever’s dormitory. Snow removal wasn’t so great in those days. One 30 degree-below morning, only the teacher and one boy appeared at school. For her pains, the teacher had a frosted spot on her nose. The boy walked one-and-a-half miles, the teacher about one block.

In those days, the mailman delivered to Jackson Harbor and the East Side in the morning by horse-drawn, small covered sleigh. One morning, the roads were impassable for cars, so the friendly mailman kindly took me from my home in Detroit Harbor on the long route through the East side and deposited me a bit late at the school. I taught nines year at Jackson Harbor and never missed a day of school. There were no substitutes, no sick leave, no personal days for business.

But there was a short Christmas vacation and two days for Thanksgiving. School began at 9 a.m. and let out at 4 p.m. There was one hour for lunch except in winter when it was one-half hour so it wouldn’t be too dark when the children walked home. At the end of each day, the teacher filled all the blackboards with the next day’s assignments. A couple of girls stayed after school and swept the floor.

The school year ended in May with a public picnic. A big ball game followed the dinner. Ice cream was the big treat. Tom Nelson made it in five-gallon containers, and each person had all he could eat.

In 1945, the four elementary schools merged at Detroit Harbor. Washington Harbor became the Island’s high school with Ann and Carl Schaub as teachers. Roger Gunnerson bought the Luke School, converting it to a hardware store and attached living quarters. The Jackson Harbor School was converted into a package liquor store with model kits for youngsters. After several owners, this old school building was remolded by Walter Schutz to become the Sievers School for Fiber Arts.

Program for a One-Teacher School 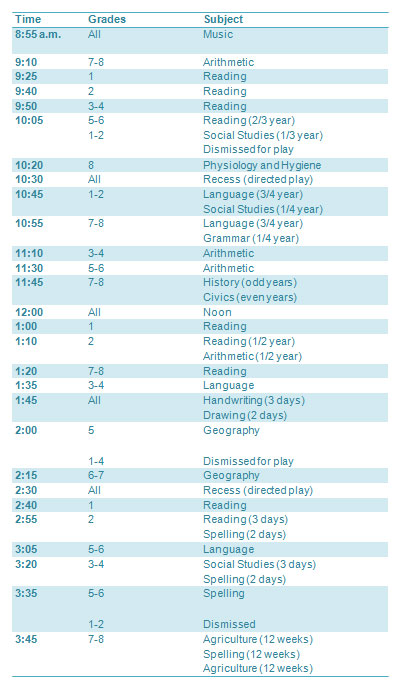