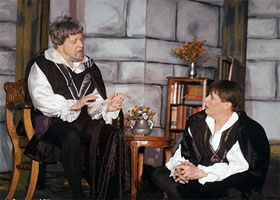 Since 1984, Island Players has served Washington Island as a non-profit community theater. In fulfilling its mission – to bring quality theater experiences to the Washington Island community through performances and programs for adults and schoolchildren alike – the Players produce full-length plays and musical productions, sponsor workshops and informal play readings, and provide programs in the public school and a summer acting camp for children.

Through its various productions and programs, Island Players gives performance opportunities to hundreds of participants while providing entertainment for audiences which now number in the thousands. We regularly reach a majority of the Island’s population, both year-round and summer residents, as well as visitors to the island.