The Significance in a Name 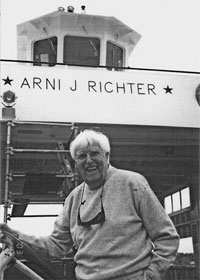 When a set of blueprints from Tim Graul Marine Design, Sturgeon Bay, arrived in the Ferry Line mailbox in 2001, we were hopeful this might be the solution for a new, all-season ferry.

On the ferry’s bow, also shown for the first time, was printed the name ARNI J. RICHTER. Knowing Arni, then 92, hadn’t warmed to a concept thus far, we carried the plans to his home, not mentioning the suggested name of the new ferry. When he saw it, he was pleased, as was our crew, for both the design and the naming of what would become the newest ferry in our fleet.

Several weeks passed by as the naval architect’s design details moved forward and Coast Guard plan approval was sought. A final approval was needed on the name. Arni happened to be laid up in bed with a sore back. We asked for his thoughts. This would be the seventh, and in all likelihood the final ferry that Arni would name. We wanted to get it right, and so did he.

Arni had first supposed that A. J. RICHTER might suit best, using first and middle name initials, as was the case with C.G. RICHTER, named for his dad, Carl Godfrey Richter. That ferry, also an icebreaker, was christened in 1950. After a few days cogitating over the name, Arni called grandson Hoyt. He had decided that ARNI RICHTER might sound friendlier and less formal. But, a day after that, when the final deadline arrived for a decision, Arni changed his mind again, this time agreeing with the architect’s blueprint that ARNI J. RICHTER had a good ring to it.

From that day vessel construction proceeded at a rapid pace, and by now the ferry ARNI J. RICHTER has become established as the finest ferry in the fleet, although its name has often been shortened to AJR or ARNI J. in local usage.

When he rode out to the ferry dock to watch activities there in his later years, Arni often asked how “his” boat was doing. “I hope it’s in good shape,” he would smile. “It should be. It has my name on it!”

The naming of ferry vessels was an important and fairly frequent occasion over the years. When it came to choosing a name, Arni and his wife Mary took time to choose names that sounded right, names that often meant something for Washington Island in addition to family significance.

Mary Richter had been born a Cornell, a family linked to commercial fishing on St. Martins and Washington Island, and the history of these Lake Michigan islands was important to Mary. She became one of a group of organizers who formed the Island Archives under the Town of Washington. Mary influenced Arni’s decisions with naming new ferries.

The GRIFFIN, built in Kewaunee in 1946, became the first ferry built by the Ferry Line. With a welded steel hull named for French explorer Robert LaSalle’s 1679 sailing ship, this ferry for the first time made winter operations possible. In 1960 the VOYAGEUR was named for the group of early French explorers and traders, and it was constructed in a Sturgeon Bay shipyard, as were all the ferries that followed.

In 1970, Arni honored the roots of the island’s many Icelandic pioneer settlers. The ferry EYRARBAKKI was christened for a village on the southern coast of Iceland, the port from which many Icelandic immigrants embarked on a ship. This choice was significant, as it recognized the 100th year of arrival of the first Icelandic immigrants to Washington Island. Gertie Andersen was the first child born on Washington Island to Icelandic settlers, and she christened the new ferry using well water drawn from the schoolyard in Eyrarbakki, Iceland.

An Island Scandinavian Festival held each summer already highlighted the island’s heritage, but from this point forward, Icelandic heritage became even more prominent in the island’s literature and marketing, making Washington Island synonymous with Icelandic settlement.

He had been presented with a framed grouping of early vessel photographs by Mr. Henry Schuette, president of the Manitowoc Bank. One of those photos featured the ferry ROBERT NOBLE. Another strong association was that Noble had visited Washington Island late in 1863, specifically to become engaged with one of Godfrey Kalmbach’s daughters. The Kalmbach family had made their home on property near where Arni and Mary Richter built their 1950 home. In addition, Jacob Richter, Arni’s grandfather, had married Mary Kalmbach. Noble, who was determined to row back to the mainland despite dropping temperatures and seas from the west, borrowed a skiff from young Albert Kalmbach, then age 11. (This was against the wishes of Albert’s father, Albert wrote many years later.) Rough waters forced Noble ashore on Plum Island, and his ordeal of falling through thin ice eventually cost him his lower legs and many fingers due to frostbite.

The multi-deck ferry WASHINGTON was built in 1989, also at Peterson Builders. Its name was a return to an historic island event, named for this island, but really for the U.S. Government schooner that stopped in the island’s northern harbor in 1816. That schooner was the WASHINGTON, and its officers carried orders to establish a fort in Green Bay (Fort Howard).

The decision to use names meriting historical interest was furthered with the all-season ferry ARNI J. RICHTER, built at Bay Shipbuilding. This was a man who operated a vital ferry service for over 60 years, who worked and lived on the island where he had been born and raised, who honored and respected those who came before him, and who contributed in many ways to his community.

This newest ferry became the hard-working ferry of winter, as well as a productive and popular summer ferry, and its name honors the man most responsible both for building earlier ferries and for management of the company that provided the ferry service – Arni J. Richter (1911- 2009).