Jens Jacobsen did far more during his lifetime than build his museum beside Little Lake. Arriving as an immigrant boy knowing no English, he eventually became a potato farmer, an assessor, justice of the peace, town chairman, and he served on the school board for many years. He built 14 cottages. He raised four children alone after his wife of 14 years died. Just as importantly, Jens befriended generations of Island children. 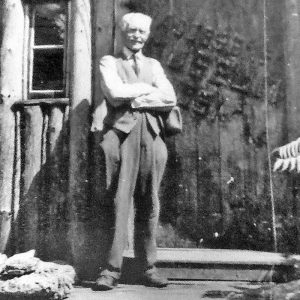 Jens Jacobsen kept pockets full of arrowheads, stones and other treasures to share with the children who visited him. He is pictured here standing outside the Jacobsen Museum door. (Photo courtesy of Jacobsen Museum)

Ruth Gau has been coming to the Island every summer since infancy. Her parents first visited in 1925. They found some acreage between Little Lake and Lake Michigan and bought it on the spot. Jens built their log cabin – using saw, ax and hammer – and named it “Balsam Lodge.” There was no well; water was hauled from the lake. Ruth and her brother Jim grew up with Jens as a neighbor. If they saw a light on in Jens’ cabin, they would walk over and borrow National Geographics from him (perhaps one of the issues now in the museum, dating back to 1934). Jens would often come to the Gau family’s cabin for dinner. “He told wonderful, wonderful stories. We would all be enthralled,” Ruth says.

She remembers his many kindnesses: dropping off firewood and fresh flowers; sending cut Christmas trees to them in DeKalb, Ill.; opening the museum to late visitors after dark, lighting kerosene lanterns so they could see the collection. Jens was always making things: the Little Lake cottages, and then furniture to go in them; rowboats and oars, and a sailboat he named “The Flying Cloud” for people to use on Little Lake. “He lived very, very frugally,” Ruth says. She recalls that he never complained about anything, and she never saw him in a bad mood.

Daryl Justinger Johnson remembers first going to the Jacobsen Museum with her parents before there was an actual road to the museum. “Even now, when I open the door of the museum, I get a flash of feeling like a child all over again. It only lasts two or three seconds, but I still feel that childhood memory,” she says. “Mr. Jacobsen was always a happy man. He had that Danish accent, and loved to tell children about the Indians. As children we wanted to hear about them. He helped children take an interest in them. He loved to demonstrate – how the Indians ground corn (with a stone mortar and pestle), how they skinned a deer. We would ride our bikes to the museum to hear his stories. He was a very special man.”

Jeannie Lindal Hutchins remembers first going to the museum when she was 6 years old. Her first impression was of Jens, more than of the things in the museum. “I liked his accent,” she said. “It was easy to understand him. He joked that he had learned to speak ‘American.’ He had a gentle way about him. He had a nice way with kids.”

Jeannie remembers that she and Mary Jean McDonald would often ride their bikes from Swenson Road to the museum, and that Jens was always welcoming. “I loved it out there. All the kids liked him. He loved children. He was like a grandpa to all of us,” she remembers. Jeannie points to a photo of Jens standing outside the museum door. “This picture reminds me of what he was like. He always had pockets bulging with the arrowheads, special stones and candies he carried for the children.” 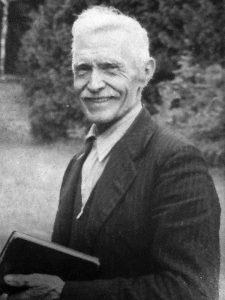 Jens Jacobsen (1867-1952) is remembered, seven decades after his death, as a great storyteller. (Photo courtesy of Jacobsen Museum)

All who remember Jens have one universal memory in common: Jens as a storyteller. Ruth, Daryl, Jeannie, Bill Engstrom, grandchildren Dewey Jacobsen and Mary Jacobsen Jorgensen … they all remember a particular story. When Jens decided that it was time for them to go home, he began telling the story of “The Goose that Laid the Golden Egg.” At the end of the story, he would reveal, hiding behind the museum door, a goose-shaped stone nestling a clutch of “golden eggs.” Then he would gently send the children on their way.

I can’t help but believe that Jens Jacobsen would be pleased to know that, more than seven decades later, the children he befriended and nurtured still remember him vividly and fondly. They still visit the museum and look in his little cabin. Memories still flood back of a kind, happy man who was happy to see them and ready to share a story about his beloved Island home.

Daryl and Jeannie have been docents in the Jacobsen Museum for many years, sharing Jens’ love of history with the many visitors who stop by. Surrounding them are the many things that Jens made and collected: sailboat models, scrollwork, furniture, arrowheads, stone tools, fossils, and poetry. And still sitting beside the door: the goose and the golden eggs.

“Are those real gold?” a child recently asked me, eyes wide. Jens would have smiled and said, “Ya …Ya.”