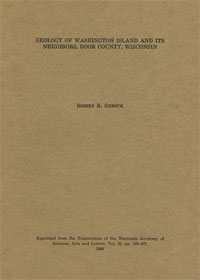 “A spectacular feature of eastern Wisconsin is the Niagara Escarpment.”

GEOLOGICAL SETTINGS OF THE ISLANDS

Location. —Door Peninsula, a long finger-like extension of northeastern Wisconsin that separates Green Bay from Lake Michigan, is carried northward across the entrance to the bay by a string of islands that ends at the Michigan mainland. The boundary between Wisconsin and Michigan passes eastward between Rock Island on the south and St. Martin on the north. This report will deal exclusively with the islands lying south of the boundary in Door County, Wisconsin. 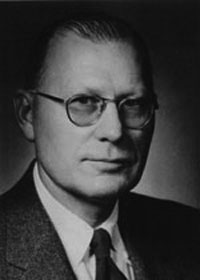 Geographic relations. —The islands from north to south are Rock, Washington (with little Hog Island [Fig. 1] about one-half mile off the eastern shore and several small sand bars and islets in Detroit Harbor), Detroit, Plum, and Pilot (Plate 1). In area, they rank as follows: Washington, about 23 square miles; Rock about 1 1/2 square miles; Detroit, about 1 1/4 square miles; Plum, about 3/4 of a square mile; an Pilot, only a few acres.

A “submarine” cable connects Rock to St. Martin on the north and to Washington on the south, Washington and Pilot to Plum, where the Coast Guard Station for the area is situated, and Plum to the mainland of Door Peninsula. Mail comes to Gills Rock at the tip of the peninsula, via Ellison Bay, and is delivered by boat to the several islands.

An automobile and passenger ferry makes several trips daily between Gills Rock and Detroit Harbor on Washington Island, depending on the weather and season of the year. Local motor boats must be hired if one wishes to visit Detroit, Plum, Pilot, or Rock islands. In cold winters, the water about and between the islands freezes to sufficient thickness that automobiles can be driven from the mainland to the islands. This is not always a safe practice, however, for thin ice and open water have taken their toll, along with wind and storm, in Deaths Door.

Niagara Escarpment. —One of the most spectacular surface features in eastern Wisconsin is the Niagara Escarpment or “The Ledge” as it is called locally. It is a steep, westward-facing cliff that rises out of the glacial drift a few miles south of Waukesha and increases in height northward until it stands over 100 feet above the northern end of Lake Winnebago at High Cliff. It then dies out for a short distance, but soon appears as a low bluff east of Green Bay, and clinging to the eastern shores of the bay, it increases steadily in height until it culminates in the bold, precipitous cliffs at Eagle Point Park near Ephraim and at Ellison Bay near the northern end of the peninsula. The cliffs at their greatest height rise over 150 feet above the waters of Green Bay.

Northward from the tip of Door Peninsula, the escarpment base becomes submerged beneath at least 140 feet of water; yet because of increased height, it still rises well over 140 feet above water in Boyer Bluff, at the northwestern tip of Washington Island, and in the precipitous, triple-notched cliff at Pottawatomi Park, Rock Island (Plates 1 and 6).

The Niagara escarpment may be traced quite easily on the U.S. War Dept. Chart No. 715 (Entrance to Green Bay, Lake Michigan) by following the soundings. It is interrupted at Deaths Door Passage (Porte des Morts Passage) by the deep water in a transverse subaqueous valley, but it continues along the western side of Plum Island, thence due north along the western shore of Washington Island to Boyer Bluff, where it turns abruptly eastward to follow the northern shore almost to Rock Island. Then it makes a second right angle turn, this time to the northward, and maintains that direction along the western shore of Rock Island to Pottawatomi Point. Here it is again interrupted by a deep, transverse valley, which is now occupied by the Rock Island Passage, and it does not appear again until St. Martin Island in Michigan is reached.

If the water of Green Bay and Lake Michigan were lowered 200 feet, the archipelago a cross the entrance to the bay would then appear as a rather narrow, serrated ridge with a precipitous cliff—the Niagara Escarpment—along the west side, and a rather steep, eastward slope along the opposite side. Before the glaciers overrode this part of Wisconsin and Michigan, therefore, there seem to have been two major valleys with numerous tributaries bounding the ridge just mentioned. The deep channels now occupied by Deaths Door and Rock Island passages were apparently sites where the tributaries of the two major valleys had been approaching each other by headward erosion and had already lowered the ridge considerably below its summit.

Glacial history. —The glaciers, coming from the north and northeast and feeling their way southward, first sent great lobes along the two valleys and then finally rode bodily over the intervening ridge, grinding down, smoothing off, and grooving large areas of solid rock and leaving large boulders of igneous rocks not native to this part of Wisconsin on the highest parts of Washington and Rock islands. The lobes must have deepened the valleys many tens of feet, perhaps in the case of the Lake Michigan valley hundreds of feet, and the last to advance along them left a series of crescentic ridges of morainal material at the south ends of the depressions now occupied by the bay and the lake. The main lobe, which followed the eastern valley, deepened it far below what the pre-glacial stream could have done, and as a result, the present bottom of Lake Michigan is in some places as deep as 189 feet below sea level. In contrast, the deepest point in Green Bay is 437 feet above sea level.

The last sheet of ice to advance upon Washington Island left a thick morainic blanket of boulder till over the northwestern quarter of the island. As it melted back, the escaping waters collected in the deepened basins occupying the former river valleys, and the Great Lakes came into existence. At an early stage, the ancestor of present Green Bay and Lake Michigan, called glacial Lake Algonquin, was considerably larger than those two bodies of water are today and also 9 to 10 feet deeper. At this time, the island group under discussion was reduced to a few small islets (Plate 2). This old level is indicated at several places on Washington and Rock islands by caves an benches cut by the waves, and possibly some of the higher beach remnants (Compare Plate 1 and 5).