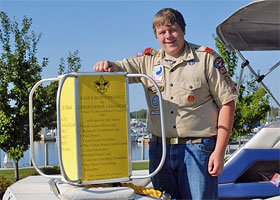 If you’ve been to Washington Island recently, you may have heard a rumor about a local Island fisherman who caught something unusual last fall in his net. Or perhaps you saw the unusual yellow shipwreck buoy outside of Ken Koyen’s Island restaurant (KK Fiske and Granary) and wondered about the back-story of where that buoy came from and how it ended up in front of a restaurant. Or, perhaps you enjoy anything nautical that has a bit of adventure. If so, read on.

The yellow buoy that was in front of the KK Fiske restaurant is actually a safety-stop buoy marking the E.R. Williams shipwreck just off St. Martin’s Island. You can find this buoy on the Coast Guard charts, labeled as the BSA CHRIS. Why “BSA CHRIS”? Let’s start at the beginning:

In 2007, Chris LaMarche, a Boy Scout from Troop 473 out of Gladstone, MI was looking for an Eagle Scout project idea. He was told that the ER Williams was an old wooden schooner-barge shipwreck that was still in pristine shape, but divers were worried that it was being pulled apart because the mooring system was attached to the wooden railings. Since Chris was SCUBA certified and his dad dove with a local dive recovery team, this project idea seemed a natural fit.

The project consisted of deploying a one ton cement “sinker” to be placed next to the E.R. Williams wreck in over 100 feet of water, attached to the mooring system. From the sinker weight, a one inch diameter polypropylene rope was attached with a heavy-duty clevis, bolt, nut and cotter key. A sub-buoy was designed to be placed fifteen feet below the surface, where SCUBA safety guidelines recommended a three minute safety-stop to prevent the bends.

The rectangular prism, aluminum safety-buoy is one-of-a-kind, designed by Chris and his family. It has handles on each side for the divers to hold onto so they remain at the 15 foot depth. While the divers are hanging out for three minutes, each side of the prism has a yellow plaque with information about the wreck and the Eagle project for them to read. From the sub-buoy to the surface buoy is another length of smaller sized rope. The original surface buoy, which is still missing, is a 10-ft. piece of four inch PVC pipe with red markings. On the surface buoy, another rope is used by dive boats to tie up. 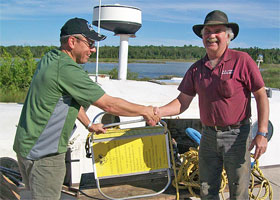 Chris had to jump through many hurdles to make his project a reality. First he needed to obtain permits from both the DEQ and Corps of Engineers, not an easy task. He also had to find sponsors and do fundraising to pay for the needed materials and permits. He applied for and obtained a grant from the Milwaukee Ghost Ship Festival to pay for a large part of the project. Finally, after two years of planning, getting permits, finding the funding, and building the weight and the buoys, he had to figure out a way to transport a one ton cement weight 21 miles into the middle of Lake Michigan and have it placed gently, right-side up NEXT to a shipwreck which lies in over 100 feet of water without any damage being done to the wreck. This is where he was blessed with some good luck. In 2009, the US Coast Guard had passed a new resolution to help the Boy Scouts of America in any way they could. Chris met Paul Bissel, a member of the Coast Guard Auxiliary from Escanaba. Paul contacted the icebreaker/buoy-tender ship Mackinac and asked for their assistance. The day the Mackinac pulled into Escanaba was an exciting day for everyone involved. The Escanaba Daily Press ran an article and photographed the event.

Once the weight was in place, Gary and his dad spent a day rigging up the mooring and putting everything in place. Since then, a few dive articles have been written about the unusual mooring and Chris’s project. Chris won the 2009 Eagle Scout project of the year from his Boy Scout Council.

Every fall, Chris’s family removes the 10-ft. surface buoy. In the fall of 2012, based on the mild winter of the year prior, it was decided to leave the surface buoy in place. Chris’s parents checked on the buoy one last time in September 2012. In early July 2013, Chris’s grandparents tried to locate the buoy and reported that the surface buoy was missing. Gary, Chris’s dad, was also told that Bob Berg, of M and M Diving out of Menominee, Michigan had gone out to dive the wreck. Bob told him that not only was the surface buoy missing, but the entire rigging was missing. However, Bob reported that he had now “found” the missing buoy by chance when he went to eat at a restaurant on Washington Island, KK Fiske.

The LaMarches then contacted the fisherman, Ken Koyen, who was also the restaurant owner. Borrowing a boat, Gary and Laura then made the trip to Washington Island to meet Ken Koyen for the first time and claim the missing buoy. As a member of the Gladstone Yacht Club, Ken had planned to return the buoy in the fall when he makes the trek over for the annual fish boil with the club. Because one of the plaques on the buoy was to thank those people who had helped with the project, Ken told us that he recognized two of the names on the buoy and planned to contact them to get the buoy back to its owner. 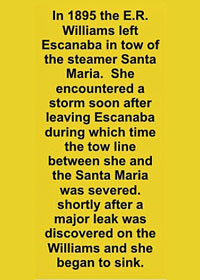 So, how did this buoy end up inland on Washington Island? Sometime after Chris’s parents checked the buoy in September, the cotter key, nut, and bolt let loose and the buoy drifted free. It floated to somewhere near Rock Island where Ken caught it in one of his gill nets in late fall. The surface buoy was missing; the smaller rope above the safety buoy seemed to have broken off. The rest of the buoy and all of the rope was intact. While putting the safety-buoy back in place, Gary found the nut sitting on the weight. The clevis and bolt were missing.

Chris and his parents are very thankful to Bob Berg and Ken Koyen for their help in returning the buoy, and to Chris’s grandparents, Jim and Lois Boydston, for letting us borrow their boat to retrieve it. Chris currently attends Michigan State University and will graduate in 2014 with a degree in microbiology, genetics, and public policy. This summer he is an intern in Washington, DC with the Senate Committee on Agriculture, Nutrition, and Forestry with Senator Debbie Stabenow. Besides being an Eagle Scout, Chris is also a Demmer Scholar. Demmer Scholars learn about federal policy-making in natural resources first hand, while working full-time in Washington, DC. The Demmer program is led by Mark Rey, executive in residence in the MSU Center for Systems Integration and Sustainability and Department of Fisheries and Wildlife. For more information, visit: http://csis.msu.edu/news/2013_demmer_scholars.