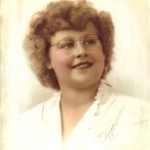 “Mom was born in 1928. Her own mother died when she was 13, in the spring, and she stayed out of school for the rest of that year to help on the farm. She finished the rest of high school in two years, graduated at 15, and went to Door Kewaunee Normal School for training as a teacher, graduating at 17, the same year she started teaching on Washington Island. She married Roger Gunnerson at age 19. Dad was an energetic guy, in fact he bought the Island elementary school he had attended the same year he graduated from high school! He then built two additions onto the school, one for our family’s Hardware/General Store, and one for the house.

“Education was always a major focus in our home — Mom completed both her Bachelor’s Degree and Master’s Degree while we were growing up. When she was a student at UW Oshkosh during the summers, Papa would wake us up early enough every morning that each of us could write her letters every day.

“As a family, Veblen terminology such as ‘conspicuous consumption’ and ‘vested interest’ were often used very matter-of-factly. It’s well-known that Veblen asserted his views in his personal habits, and we often laughed at unmade beds as being a Veblen trait. But we weren’t allowed to use that as an excuse for not doing our jobs around the house!”