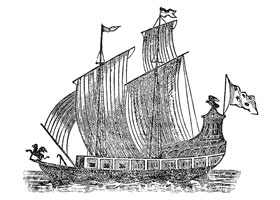 (Abridged from the Wikipedia entry for Le Griffon*)

Le Griffon (‘The Griffin’) was built by René Robert Cavelier, Sieur de La Salle in his quest to find the Northwest Passage to China and Japan. Le Griffon was the first full-sized sailing ship on the upper Great Lakes of North America and led the way to modern commercial shipping in that part of the world. The ship was constructed and launched on Cayuga Creek on the Niagara River as a seven-cannon, 45-ton barque.

La Salle and Father Louis Hennepin set out on the Le Griffon’s maiden voyage on August 7, 1679 with a crew of 32, sailing across Lake Erie, Lake Huron and Lake Michigan through uncharted waters that only canoes had previously explored. La Salle disembarked and on September 18, 1679 sent the ship back toward Niagara. On its return trip from Green Bay, Wisconsin, and after a stop on either Washngton or Rock Island, it vanished with all six crew members and a load of furs.

Le Griffon is often mistakenly called the first ship to be lost to the Great Lakes. The first ship was another built by La Salle, called the Frontenac, a 10-ton single-decked brigantine or barque. The Frontenac was lost in Lake Ontario, on January 8, 1679.

Le Griffon may have been found recently by the Great Lakes Exploration Group but the potential remains are the subject of lawsuits involving the discoverers, the state of Michigan, the U.S. federal government and the government of France.

Le Griffon was the first full-sized sailing ship on the upper Great Lakes of North America and she led the way to modern commercial shipping in that part of the world. Historian J.B. Mansfield reported that this “excited the deepest emotions of the Indian tribes, then occupying the shores of these inland waters”.

French explorer René Robert Cavelier, Sieur de La Salle, sought a Northwest Passage to China and Japan to extend France’s trade. Creating a fur trade monopoly with the Native Americans would finance his quest and building Le Griffon was an “essential link in the scheme”. While work continued on Le Griffon in the spring of 1679 as soon as the ice began to break up along the shores of Lake Erie, La Salle sent out men from Fort Frontenac in 15 canoes laden with supplies and merchandise to trade the Illinois for furs at the trading posts of the upper Huron and Michigan Lakes.

La Salle had Le Griffon built in the winter of 1678–79 at a distance of several hundred miles from any settlements on Cayuga Creek (at Cayuga Island) on the Niagara River. Le Griffon’s pattern closely followed the prevailing type used by explorers to cross the Atlantic Ocean to the New World. The exact size and construction of Le Griffon is not known. The widely referenced antique woodcutting of Le Griffon shows her with 2 masts but many researchers believe she was a 45 ton barque with a single mast with several square sails and 30 to 40 feet (9.1 to 12 m) long with a 10-to-15-foot (3.0 to 4.6 m) beam.

In 1679, the short open-water season of the upper Great Lakes compelled La Salle to depart for Green Bay on 12 September. They sailed from the Straits of Mackinac to an island (either Washington Island or Rock Island) located at the entrance of Green Bay (Lake Michigan) and anchored on the south shore of the island and found it occupied by friendly Potawatomies. The traders had collected 12,000 pounds of furs in anticipation of the arrival of the Le Griffon. La Salle decided to stay behind with 4 canoes to explore the head of Lake Michigan. Le Griffon rode out a violent storm for 4 days and then on 18 September, the pilot and 5 crew sailed under a favorable wind for the Niagara River with a parting salute from a single gun. She carried a cargo of furs valued at from 50,000 to 60,000 francs ($10,000 – $12,000) and the rigging and anchors for another vessel that La Salle intended to build to find passage to the West Indies. La Salle never saw Le Griffon again.

Father Hennepin wrote that Le Griffon was lost in a violent storm. Some charged fur traders, and even Jesuits with her destruction. Some said that the Ottawas or Potawatomies boarded her, murdered her crew, and then burned her. La Salle was convinced that the pilot and crew treacherously sank her and made off with the goods. There is no conclusive evidence about any of the theories about Le Griffon’s loss.

Le Griffon is the “Holy Grail” of Great Lakes shipwreck hunters. A number of sunken old sailing ships have been suggested to be Le Griffon but, except for the ones proven to be other ships, there has been no positive identification. Le Griffon was the second in a string of thousands of ships that found their last berth on the bottom of the Great Lakes.